EOS Price Analysis: What’s Next For EOS/USD as Coin Pumps 100%?

There’s a proposal to increase staking rewards on the EOS network, a factor that has contributed to the massive spike in EOS price

EOS has pumped more than 100% over the past three days to reach intraday highs of $13.23 in early morning deals today. It is the first time since June 2018 that the coin’s price has jumped above $9.00 after failing at two previous attempts in May 2019 and mid-April 2021.

For the EOS/USD pair, the price uptick follows an announcement that the network is looking to increase its staking rewards. Ethereum Classic’s 300% spike this week and Dogecoin’s 130% rise are the only coins that have beaten EOS’s recent rally.

Can EOS bulls hold onto the gains or rebound higher if sentiment continues? Here’s an outlook for EOS/USD’s potential price movements in the short term as we head into the weekend.

EOS/USD has a high formed near $12.18 on the day as bulls attempt to ward off bears. Although buyers have been able to purchase the dip from the old ascending trend line, downward pressure still abounds above the 0.236 Fibonacci retracement level ($11.56).

Despite this, the technical outlook currently suggests EOS is in a positive zone. The MACD is still above the signal line and the RSI is well placed in the overbought territory. The upward curve of the 50 SMA also supports a possible upside flip in the short term.

Bulls need to break above the trend line and retest the $13.50 area to open up a path for further gains above $14. Beyond this, legitimate targets lie in the $15-$20 region. 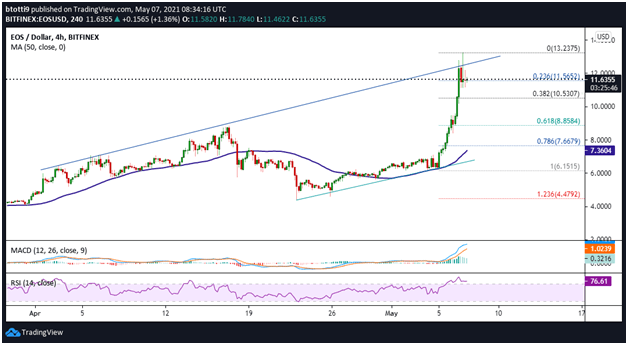